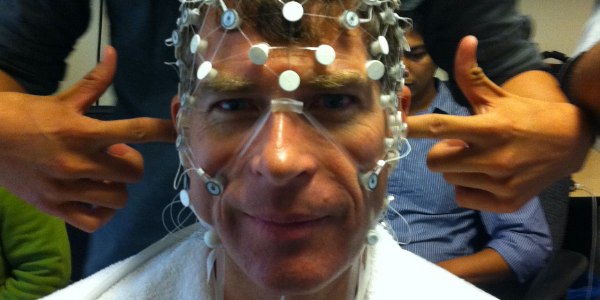 Immersion is a prediction engine.  While we have discovered that immersive experiences are enjoyable, ultimately Immersion allows our clients to accurately predict what individuals and markets will do.  Immersion consistently predicts business outcomes with 80% and greater accuracy because we are signal agnostic and promiscuous. We measured hundreds of brain signals simultaneously and identified combinations of them that were most predictive of what people do after an experience.

Then, we eliminated neural signals that failed a test for "robustness." This is mathematical evaluation of whether a data stream consistently predicts outcomes.  All the EEG signals failed this test.  Put differently, none of the 120 signals from an EEG add to the predictive power of Immersion.

Here's why: The brain networks neurons to accomplish tasks.  EEGs pick up discrete populations of neurons but poorly capture networks of activity.  Our statistical analyses showed that signals from the nerves sending information from the brain to the body are robust predictors of people's actions. Immersion's scientists then wrote algorithms that use signals from the peripheral nerves to infer what the brain is doing second by second.

Another reason EEG does not improve predictive accuracy is that the science showed that most of the variation in immersion is due to people's emotional resonance during an experience. Emotional responses arise deep inside the brain.  An EEG primarily measures activity in the brain's outer surface, called the cortex, that is far from the brain's emotional centers.

Because we have always been signal agnostic and promiscuous, rather take the data that is spit out from some device and force it into a story of what it means about an experience, we created our own measures from raw neural data explicitly to maximize predictive accuracy.  What makes Immersion unique is that we can pull all the data we need to generate these measures from smart watches and fitness sensors sending data to cloud servers where our algorithms live.  We spent all those years establishing the science of Immersion to make it simple for anyone to predict market outcomes accurately.

EEG, that is so last century.  And, who wants to wear a weird helmet on their head all day!

If you need to predict what people will do in real-time and at scale, Immersion is your only choice.  Reach out and find out more.