The American Psychological Association christened the 2000s "The Decade of Behavior."  They even invited me to give a keynote address on behavioral neuroscience at their national convention.  The result?  Research by prominent psychologists has shown that fewer studies that seek to explain and predict behavior are being published.  What psychologists have focused on, because it is faster to research and publish, are studies of introspection, feelings, intentions, and other self-reported data that copious research shows are only weakly related to actual behaviors.

Immersion was built to do a single thing: predict behavior.  Actions speak louder than words, and when you accurately predict what people will do, you can monetize this knowledge.

But, how can you be confident that Immersion consistently and accurately predicts what people will do? There are two scientific reasons why Immersion is so accurate.

First, the Immersion algorithm was reverse engineered.  My team and I took thousands of blood samples to identify neurochemical changes for people who took an action after an experience.  The actions we investigated included purchasing a product, donating to charity, emailing one's congressperson, remembering information two weeks after it was shown, and many others.  We published this research in peer-reviewed journals to ensure the scientific community confirmed our findings.  Here's what a typical week in the lab looked like for me--that's a five-gallon biohazard bucket full of tubes of blood, needles, and pipettes. 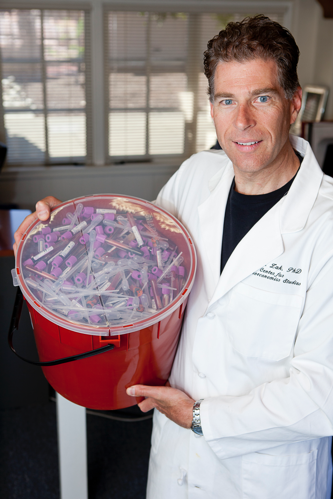 We then mapped neurochemical changes to brain activity using functional MRI, EEG, and responses in the peripheral nervous system until we identified a set of neural signals that consistently predicted people's behaviors.  Starting with the actions people took, we optimized the predictive ability of these neural signals, creating a measure we call Immersion.

Second, we extended our analysis to predict activity in markets.  We improved the Immersion algorithm by asking it to predict things like TV ratings, movie ticket sales, Spotify streams, sales bumps and lots more.  The gold standard in science is replication.

Immersion is a 20-year success story.  It took us that long to do the foundational science that established Immersion as the only neuroscience offering that predicts behavior with 80% and greater accuracy.

The Decade of Behavior has come and gone, but with the Immersion platform, you can predict behavior right now.

Want to see how Immersion can help you predict market outcomes with over 80% accuracy?  Schedule a demo today, and we will prove it.

Many companies built their reputations on surveying a thousand or more people to capture national...

Too many decisions in your day? Take care of your brain!

After a day of making decisions turns into a week of it - the brain fog can be REAL. Constant gut...

Last week our friends at Kia Motors spent $11M on their new Writer ad. Was it worth it? Let's find...