Peloton - AND Chris Noth - Fire Back 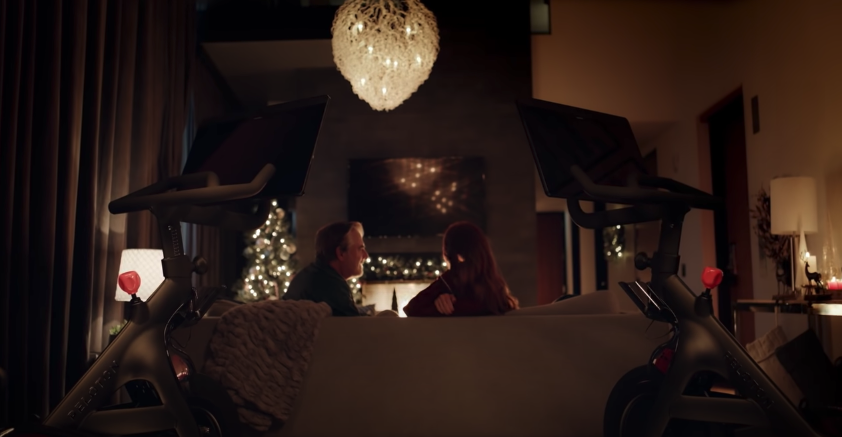 Remember that controversial Peloton ad wayyyy back in the "before-times" of 2019?

Peloton came out with an ad in December 2019 showing a young women whose husband bought her a peloton as a gift. The ad was a series of short videos of her using it to change her life for the better . . . but was widely interpreted as something out of Black Mirror: a woman being forced to cycle in front of a large screen against her will.

That same week - Ryan Reynolds & Aviation gin swooped in with an ad starring the now-famous Peloton woman drinking a martini at a bar in a "safe space."

If you were in on the Peloton joke - it was pure gold. (If you need a quick refresh - this article from Washington Post recaps it neatly.)

Well. Peloton didn't recoil at Ryan's efforts. They hired him and his agency - Maximum Effort -  to work on their new ads.

Now come on back to modern day with us . . . and be warned! If you have somehow stayed immune from the great spoiler alerts on "And Just Like That," the new "Sex & the City" reboot, pause your reading, go watch episode one and come back. Promise it will be worth it.

For everyone else - buckle up!

Here we are in 2021, diving into the first two episodes of the "Sex & the City" reboot. Our characters are here, a decade plus later, and much has changed for the crew. Least of which - Mr. Big has a Peloton!

Alas, a mere 45-minute episode later, this does not bode well for him as he completes a class with his favorite instructor and then collapses in his bathroom of a heart attack . . . that eventually kills him.

Ever fans of the clap-back, Maximum Effort was all over it with their new client Peloton - flipping a response ad directly from the brand starring Chris Noth (Mr. Big himself) and his Peloton instructor sitting on the couch in front of a cozy fire.

On comes the ever-soothing voice of Ryan Reynolds, boasting the health claims of a Peloton - "strengthens your heart muscles!" - and exclaiming "He's alive!"

Clever. Quick. And a heavy dose of humor from a brand that's been previously criticized for taking itself way too seriously.

It's got the PR twinkle all brands are vying for! But were consumers immersed? Let's go to the measurement.

With an average immersion score of 64 - this ad is coming in 11 points higher than the norm for this content!

Not only did it perform well - it peaked just as the camera pulls back to reveal of the Peloton bikes in front of the couch.

And yea another spike, around 81, just after Reynold's speech - "He's alive!" - and a reveal of the logo. See the full measurement and the ad HERE.

And Just Like That . . . Peloton & Maximum Effort delivered on timing, humor, cultural relevance AND Immersion.

We're calling this one a SLAM DUNK for one of our favorite ad creators and a brand who's rapidly shedding an antiquated, luxury sheen to become a house-hold name.