Four Ways to Shorten the OODA Loop in Training

"Do you mind getting beat up a bit?"

The question made perfect sense when Lt. Lopez said that the "enemy combatants" were wearing black T-shirts.  I had dressed in a black T-shirt, camo pants and boots for a day of combat training with the U.S. Army.

Sure, I'll play the role of enemy in a training exercise designed to prepare soldiers for the mountain redoubts of Afghanistan.

I did get body-slammed a couple of times, once driving cactus spines into my thigh.  This was painful but also super cool for a nerd seeking a better understanding of effective training techniques.

After every simulated skirmish, the action paused for an immediate debrief using the "three right, three wrong” technique.  Those involved in the action as well as observers identified three things that the soldiers did correctly and three things they needed to improve.  Even the slightly injured scientist was encouraged to contribute.

The debrief is an essential part of the OODA loop developed by military strategist Col. John Boyd.  OODA stands for observe–orient–decide–act and importantly is a cycle in which the observe and orient parts (the latter denoting analysis) may occur many times before one makes a decision and then acts on it.  Boyd's key insight was that performance improves when the OODA loop is shortened.  To do that requires having the right data. 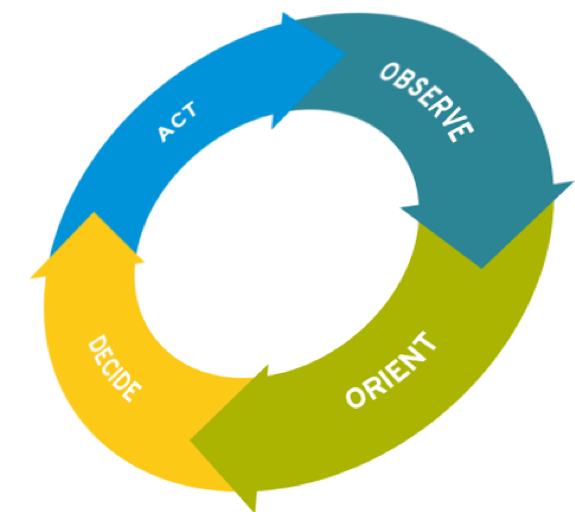 The after-action brief--what in the civilian world is called feedback--is essential to improve performance, but often times it is too late.  In the world of training, traditionally feedback is based on simple surveys given after training is over.  This is too late and does nothing to shorten the OODA loop.  It’s a way to measure the body count, not a way to improve performance in real-time.

Corporate training seldom has the clear metrics used in the military such as Enemies Captured in Action and Enemies Killed in Action.  In the corporate world we need to know the Return on ExperienceTM from training.  This return is a function of increased productivity, increased retention, and increased sales --all difficult to measure with precision as it relates to training.

Here's the solution: The OODA loop for training can be shortened by measuring immersion.  Immersion directly captures the brain's Return on Experience and accurately predicts increased productivity, retention and sales.

Immersion quantifies how much the brain values an experience.  Higher immersion increases retention of presented information and post-training use of acquired knowledge.

The Training OODA loop is shortened in four ways.

Training is not rocket science, but it is neuroscience.  Neuroscience that measures just what trainers need to know, in real-time and at scale.  Observe-measure; Orient-measure, Decide-measure, Act-measure.

Tighten your training OODA loop using Immersion to prove you are producing a high Return on Experience.

Would you like to see how Accenture is using Immersion to improve their corporate training programs?  Setup time for a demo today and see how you can use Immersion in your own training intiatives.

Your Virtual Events are the New TV

Immersion on the Move

Every year cars have more automated features, but some people still want to get on the road simply...

Thank You to Immersion Super Fans

"Gratitude is not only the greatest of virtues, but the parent of all others." So said the Roman...