Getting Schooled: How Immersion Works in the Classroom 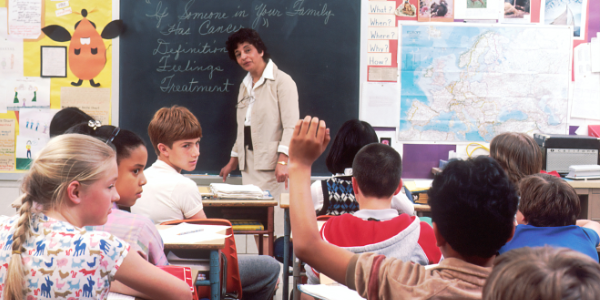 At Immersion, we are "on the ground" technologists.  By that I mean we have partners not clients.  When our partners find new applications for our technology we ask to observe what they are doing to see if we can suggest improvements.  This is just what we did when a partner brought Immersion into K-12 classrooms.

MeTEOR Education designs spaces for participatory learning and shows teachers how to "flip" their classrooms.  What MeTEOR was missing was a way to give teachers rapid feedback on how effectively students were responding to flipped classes.  Should students spend 20 minutes or 45 minutes on the science lab?  Should the journalism project take three classes or two?

This is how I met Mrs. Rodriguez.

I spent a morning in Mrs. Rodriguez's fourth-grade classroom in a city in which one-quarter of households are below the federal poverty line.

Mrs. R, as the kids called her, was measuring immersion while the students did various learning exercises and then discussed what they had learned.  Mrs. R told us that she used the Immersion platform in two primary ways.  First, she monitored immersion while students worked in groups.  If she had allocated 20 minutes to do a task but the kids' immersion bottomed out after 10 minutes, she would cut the exercise short because little additional information is retained when immersion is low.  Then, Mrs. R did something brilliant. She got the kids to stand up and stretch and move.  Then, she had them discuss what they had just learned.  This shows her deep understanding of how people learn and the importance of repetition.

Maria did not ask many questions in class and Mrs. R thought she was not interested in school.  Mrs. R told me that when she started using the Immersion platform Maria was the top Immersion Champion in math class for three consecutive days. After the third day, Mrs. R called Maria over and said "It seems that you really like math class."  Mrs. R told me that Maria starting beaming.  "Yes, I love math" she said.  After that Mrs. R starting asking Maria questions during class and it was clear that Maria understood the material well and could tell the other children about it. Mrs. R told me that Maria came out of her shell and spoke more, even without being prompted.  She became the math class leader.

Without technology to measure Immersion, Mrs. Rodriguez said should would not have known to reach out to Maria--after all, she has 25 children to keep an eye on.  The Immersion platform can be thought of as a way to augment teachers' brains and help them optimize learning opportunities.  Immersion also tells teachers in real-time when students need additional reinforcement of the material rather than waiting weeks to get a failed test.

Improvements cannot be made without measuring what matters.  MeTEOR Education improves the lives of students nationwide and we are proud to be part of that effort.

If you would like to improve outcomes for the education and training you offer, please reach out and schedule a demo. Why wait any longer to raise the return on your training investment?