Does Brady's Hertz Commercial stand up to internet hype?

Hertz is adding electric vehicles to its fleet and it’s making quite a stir.

Hertz is adding 100,000 Teslas to their fleet of electric vehicles (EV) and spreading the word with new ads - featuring Tom Brady. 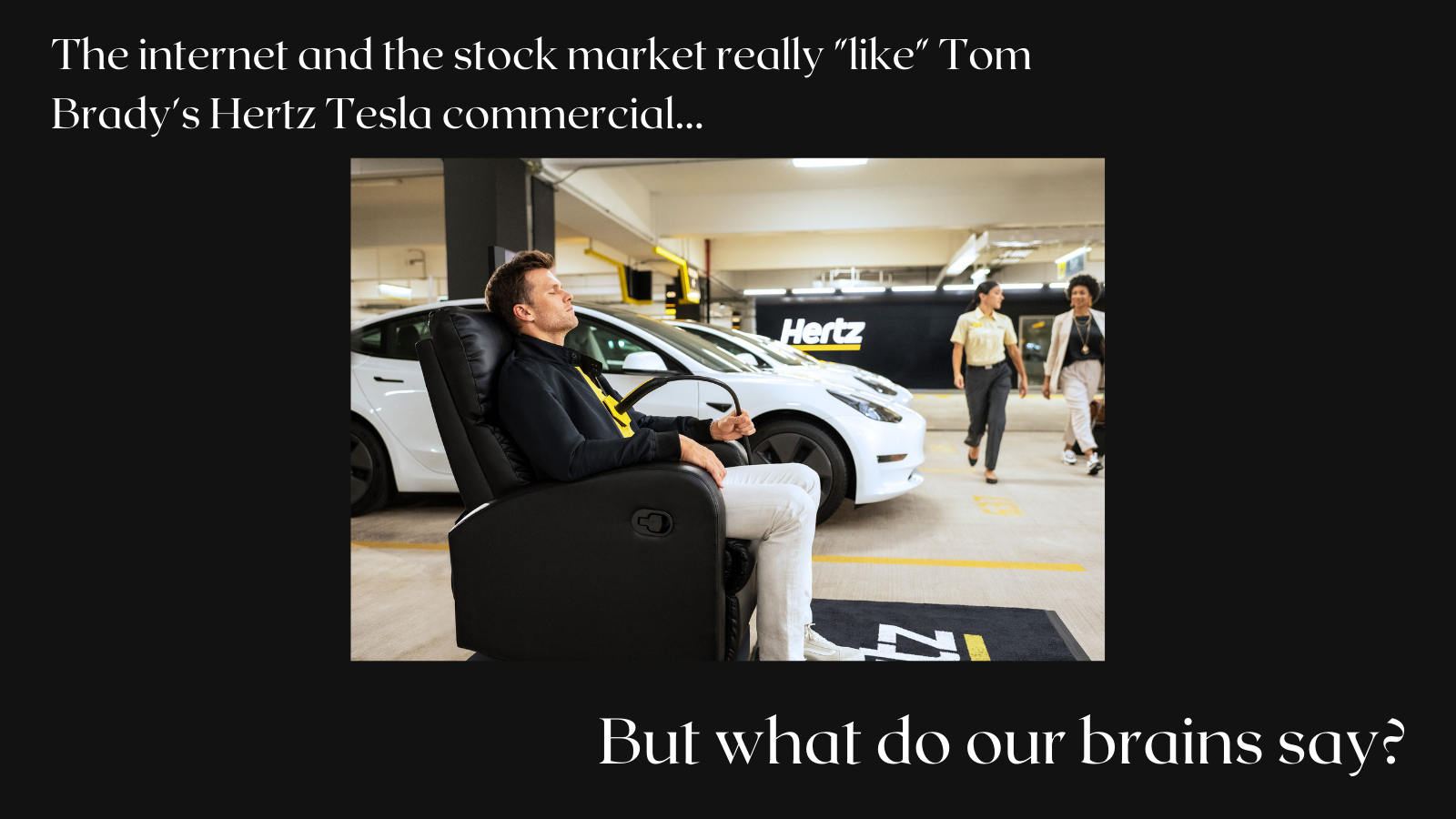 Now - we know your feelings about Tom Brady vary depending on whether you’re a Patriots (or now Buccaneers) fan, but there is no denying that he can move a football down the field. And now Hertz is hoping he can move their product down the finish line of people’s purchasing decisions.

Brady seems like a natural choice for Hertz to use as their spokesperson. Hertz is coming out of bankruptcy and this deal with Tesla is a hopeful effort to come out strong to appeal to consumers who support green initiatives. Brady has been known to do miracles like lead the Tampa Bay Buccaneers to a Superbowl championship in his first year with the franchise (not to mention the six other rings acquired in New England). But the question remains: can he work the same magic for Hertz off the field that he works on the field? Will viewers be moved to rent from Hertz?

Here at Immersion, we know that “like” does not equal action. A connection between content and viewer is an indicator of a person’s response to a call to action. So, true to our curious nature, we decided to measure the Immersion of the Tom Brady/Hertz spots.

The ad “Plugged In” shows Brady amongst a group of Tesla’s charging up in a Hertz lot. Clearly, there’s a play on Brady’s rigorous training behavior by having this be part of his weekly routine to stay in shape. While not sure if intentional, this spot frankly had me thinking about IronMan with the way his charging port was in his chest.

How did they play out with our audience? Click here for the second by second play of Immersion to see the highs and lows of these spots.

Unfortunately for Hertz, the ad did not captivate people's brains. The emotional resonance was just not there. The Immersion score was 38 which is 15 points below the industry average for advertisements. This means that viewers did not connect with the ad and will likely not have recall about the brand. So when they are thinking of which rental car company to use, this ad will not come to mind or worse, they may remember it being a different brand and use them.

Immersion measures the brain’s connection to experience whether that is watching an ad or participating in a live experience. A higher Immersion score means that participants are more likely to heed the call to action, in this case, using Hertz to rent an EV. Ads can be entertaining, but at the end of the day, a company does a media buy to move their products from the shelves (or parking stalls) to the consumer.

If you look at the group data, you will see that the highest level of Immersion was short of the industry average by one point. The beginning of the ad starts pretty low (see the red bar) which means people may even check out before they get to the part where Immersion is higher.

The middle bump is where Tom Brady makes an appearance, so his presence is valuable to the spot. But again, it still does not reach industry average which means there’s more that could have been done with him to draw the consumer into the experience. The drop right around 0:21 seconds in is when he says his famous tagline, "Let’s Go," which leads to the Hertz "Let’s Go" jingle.

By the time the Hertz logo is splashed across the screen, the audience is down to an Immersion of 16 ... they are checked out. While the Hertz sign is in the background for parts of the ad and also at the very beginning, you can see that its placement is not strategically timed to stick with the audience. Placement in the peak would provide more lasting impressions for the audience.

Knowing how an ad will perform before spending the money to buy the ad space is like having a crystal ball to predict the future. I know, it is hard to believe that this technology exists. But 20+ years of laboratory research in the field of neuroscience has done just that. Just think how crazy it was 20 years ago to think we would all carry computers in our pockets that would allow us to watch TV, conduct meetings and store thousands of pictures and songs (oh and make phone calls, too). Don’t let your brand end up using old tech to solve new problems. Give Immersion a try and make your content count.