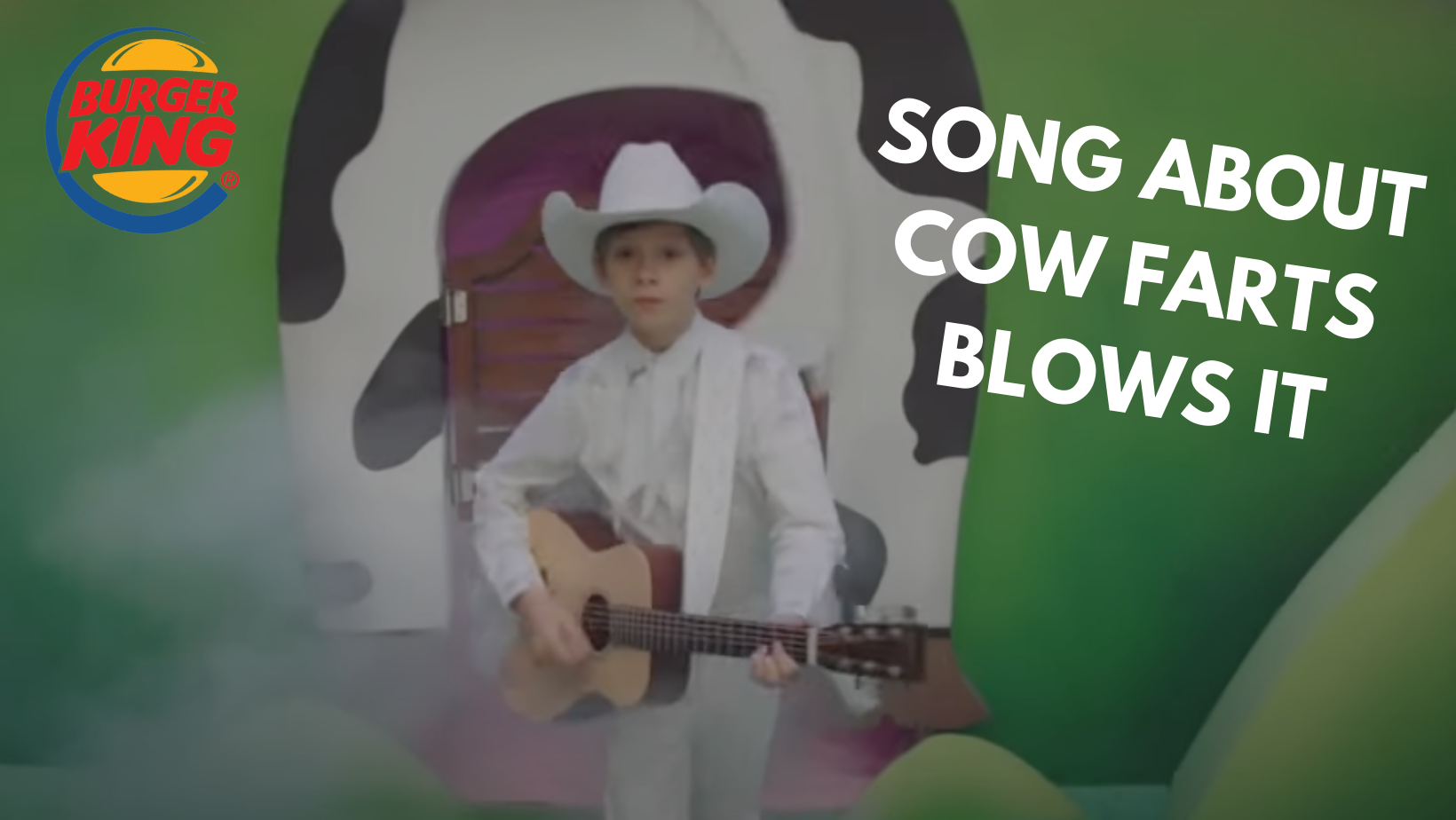 Burger King is taking a big leap . . . into cow farts.

The newest ad by this fast food giant focuses on a campaign to reduce cow, uh, emissions to ultimately reduce the impact of the meat industry on climate change.

The trend in animal-alternative products is picking up steam - focusing content on how eating less meat is kind to our animal friends and our planet.

But this move by Burger King is masterful is getting meat-lovers in on the game of reducing their climate impact without reducing their burger intake.

The ad itself is just plain fun. A young kid gussied up like an old time-y country star, emerging on stage from a cow's butt amidst a foggy setting. Strumming away with his jacket-fringe dancing back and forth while he serenades us about cows and methane - striking a ridiculous, humorous chord.

Throughout the performance, puppet cows chime in and more kids join him onstage wearing grass hats and dancing to the tune. And the song honestly does a great job ear-worming its way into your brain hours after you watch the ad.

But as while great marketers can certainly appreciate a hilarious ad, the Brand Managers, Insights leaders and CMO's among us have to wonder . . . is this going to drive sales?

We love a good laugh and had to get The Brainiacs to measure their brains while watching this commercial.

65% of all content performs better than that when measured by Immersion.

30% of the audience was tuned out for the majority of the ad. Not something that will powerfully drive brand recall.

Looking into the overall performance of the ad, we can see consumers started with high immersion.

A score of 54 is a bit higher than the industry norm for this type of content, which is 53.

This analysis shows us that the ad performed 16 points below the industry norm. Our research shows that every 10 point increase in Immersion can drive sales up by 5% . . . this ad won't do much to move the needly there.

Diving more deeply into the specifics, we can see exactly which moments performed poorly. At 34 seconds in, our audience hit a low moment of immersion, which was repeated again at 0:52 and 1:49.

One compelling way to use Immersion's measurement & data to iteratively improve an ad is to look at the second by second measurement and understand what is happening in the content for peak highs and lows. You can watch the ad and see the full measurement here.

You will notice the first low occurs when the song is getting into the specifics of climate change caused by all this cow-created methane they are signing about.

This is specifically bad for this ad's ability to drive sales for Burger King. The brand and messaging isn't even mentioned until 0:46 in the ad - a point at which the audience's immersion is incredibly low.

Another unfortunate piece of content placement is the call to action for the ad, which occurs at 1:52, another incredibly low moment of immersion for our audience.

Even if the audience will remember the song (🎶 methaaaaannneeeee 🎶 - so catchy) - they are not likely to remember the brand, have future recall or be any more likely to purchase from Burger King based on the moments of immersion in the ad that coincide with its mention.

We know from extensive research that storytelling drives immersion, increases sales and makes for great ads. But even if the mechanic (say . . . a song about cow farts) doesn't lend itself completely to storytelling - there are ways to drive sales by more strategically placing the brand in moments of high immersion.

For example, Burger King could have easily capitalized on the high immersion at the beginning of this ad by adding a "Burger King Presents" title at the start of the song.

Want to dig in to analyze this ad for yourself? You can see the full measurement here.

Do you have an ad you'd like to test?

Drop your content via the link below for a free quick test to see if neuromarketing measures your ad favorably or if some easy edits will help you drive sales with your content.