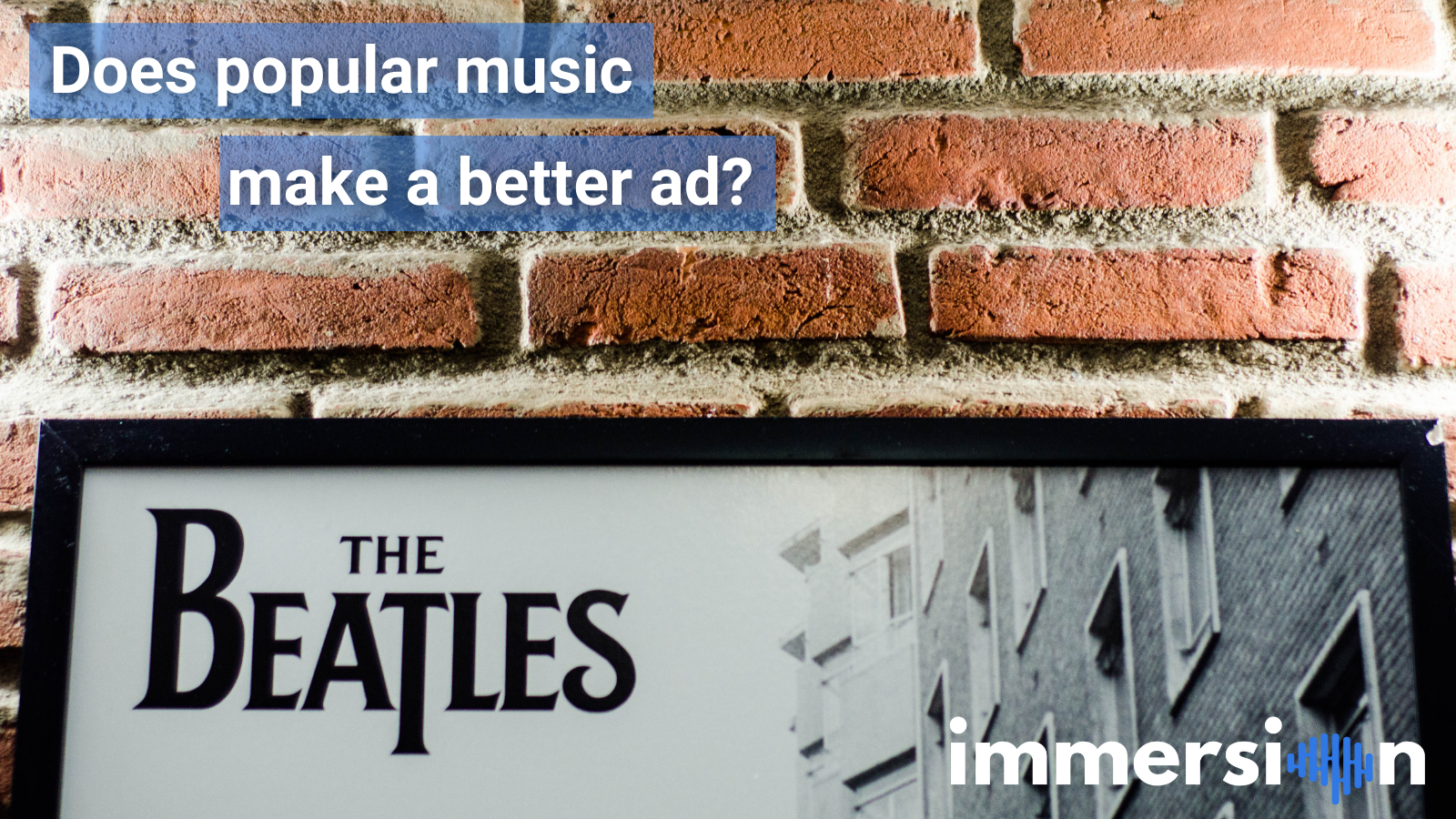 Every so often you hear about a brand dropping a huge sum of money to secure a famous song in their ad to make their audience remember their product and immediately go out and buy it. But is that really the case?

Does a popular song make you more inclined to buy or remember? I have spent the first half of this year trying to find out . . . and the results are surprising.

Back in 1987, Nike introduced a new shoe that needed a strong launch into the market. While Nike is a household name today - that was not the case in 1987. 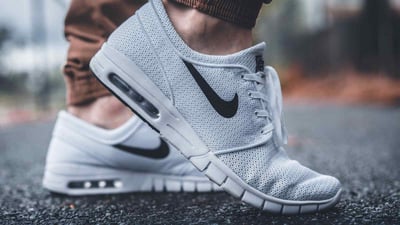 sole. An iconic product today, they knew they needed something big to launch this “revolutionary” shoe into the sneaker market.

So what better way than to use the Beatles “Revolution” in their ad? This was controversial for numerous reasons - including the fact that they spent over $500K on the music.

Remember, that was in 1987…in today’s dollars it would be over $1.2M. You may be asking why a company would spend so much money on a song? Funny you should ask….

For years and years, companies have used music in their advertising to entice consumers to purchase their products. While early efforts in advertising focused on the merits of the product itself, as time progressed - ads became more about appealing to the emotions of consumers through creative and entertaining content.

As consumers have been bombarded with more product information through the proliferation of marketing channels, it has been harder for brands to cut through the clutter to engage their target audiences and have an effect on behavior choices and product preferences.

It is estimated that consumers, on a daily average, are exposed to 6,000-10,000 ads a day. This includes all ads–billboards, YouTube, Facebook, TV, print media, etc… There’s no denying that is a lot of information exposure and far too much to process. In fact, studies have shown that we only pay attention to about one-third of those ads.

Consumers see ads everywhere they go and most of their impact falls to the wayside - providing limited to no ROI to brands. This is a troubling thought for marketers who need to stand out amongst their competitors in order to have a successful product.

Over the years, studies have shown that music can positively impact consumer recall. However, choosing which music to accompany the ad is not an easy task. Brands are left to wonder - should they choose a costly popular song - like Nike did with “Revolution” or will a less popular song have a similar impact and thereby reduce the expense of the ad? We were interested in finding out!

After reviewing previous studies on music and consumer behavior, I designed a study to have people watch ads with popular and less popular music and measure the impact. Using Immersion, we set out to see if consumers had greater emotional engagement with ads that had popular music as opposed to lesser-known music.

Immersion is a measurement of a person’s neurologic connection to an experience or piece of content that predicts their future action with over 80% accuracy. This measurement is captured via a heart rate measurement device (i.e., Apple Watch) and transferred into a score based on an algorithm developed based on twenty years of research.

Immersion detects changes in the release of Oxytocin and Dopamine in the blood through the changes in a person’s heart rate. The presence of these neurochemicals during an experience indicate a heightened state of immersion with the ability to drive action more effectively and increase brand recall. You can learn more about it HERE.

The technology used to measure Immersion shows a second-by-second measurement of the emotional connection a person is having while participating in a recorded or live experience. This is a much more concrete metric than impressions, which show that a person saw an ad – but no information on what they did with the information they saw.

Attention or emotions do not prompt action. But the emotional resonance during a high level of Immersion predicts behavior with 80% accuracy. In our study, using Immersion allowed us to see if popular music would create a more emotionally resonant experience, leading to greater purchase intention. Without improving the bottom line, a major spend on popular music would not seem to be a prudent investment.

So how exactly did we do this?

The first challenge was finding three consumer product ads with no dialogue so we could focus on the impact of the music. We chose an ad for the following brands: Kuhl outdoor clothing, Stance socks, and Nivea spray sunblock.

The next challenge was finding the right music. Each song needed to fit the brand in order to not sound out of place–a task that can be harder than it seems. We decided the best songs would be pre-2000 Top 20 songs for popular music and songs that had fewer than 13,000 streams on Spotify for the less popular music.

Why pre-2000? Well, because before the rise of digital streaming, music existed more as a monoculture. 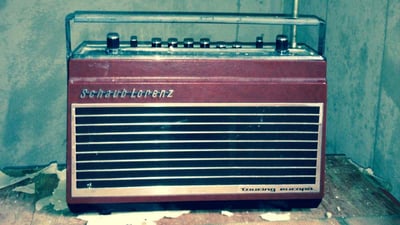 Radio (remember that?) would do weekly Top 20 shows indicating the most popular music of the moment. The growth of the internet and apps like Spotify have changed all that. There are now multiple sources of music and people have more freedom in their music choices. Rather than have to wait for a song to finish on the radio, they can now click the skip button. Using pre-2000 songs for our popular selection provided a greater chance that the song would be familiar to the audience. The popular songs required some historical research but were fairly easy to find (you can see them listed in the chart below).

When I started this study, I assumed that the popular music would have higher Immersion than the less popular songs. After all, why would companies spend a fortune on licensing rights if there was no benefit?

So what did the study show?

The charts below show the results we found. The differences were not dramatic, but even if they came out at 50/50, that would still indicate that the additional spend on popular music is not really worth the investment.

As you can see, when grouped by popularity, the less popular music has an almost 5 point lead over popular music. When you look at the ads individually, the pattern remains the same for two of the brands, with only Kuhl being dead even.

When looking at the data, it would seem that the extra spend is a lot of wasted money if popular music cannot create a better experience for the consumer. 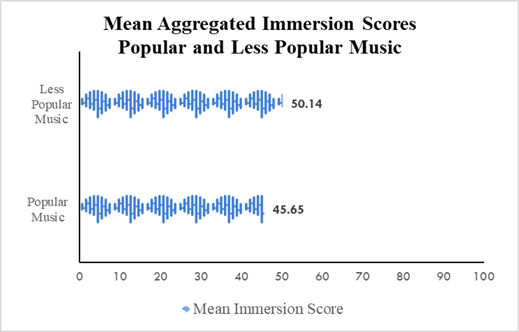 By using Immersion, I was quickly able to see the level of emotional engagement a person had with the content. In the past, a marketer might not understand the impact of an ad until they saw the revenue returns, far too late to make any changes.

Immersion allows for decisions to be made earlier in the marketing process, saving money, time and creative energy.

In the case of choosing music to accompany an ad, companies can now test thier ad with different music selections to see which resonated most with the audience and would be able to save thier budget for other areas of their advertising spend.

But back to the data…which was befuddling me at this point.

Why wouldn’t popular music create greater engagement? A few reasons came to mind. First, the use of popular and familiar music may bring up autobiographical memories in viewers that are unrelated to the product in the ad.

In this case, the consumer may be preoccupied with their memory associated with the song and not paying attention to the ad thereby reducing recall. This could explain why Immersion scores were higher for the less popular music. In the absence of distracting memories, they would be able to focus more on the content of the message.

The second factor could be that popular music is harder to define in the internet age. The songs selected for this study were from pre-2000 when Top 20 music had a greater impact on culture. With the introduction of the internet, there is less centralization of culture. As a result, what is extremely popular to one person may be unrecognizable to another. The monoculture that existed before the internet is now broken down into various micro-cultures.

Blindly choosing (and paying exorbitant licensing fees for) a popular song to sell your product may not be the best decision for a marketer to make. The data proves that the popularity of the song (and therefore the higher expense of using it) does not significantly drive immersion or future action in your audience.

Instead of wasting hundreds of thousands of dollars of marketing budget - a smarter approach is to gain a thorough understanding of the target market and whether micro-music cultures can be identified to have the broadest appeal. Using tools like Immersion can help pinpoint when a target audience has peak engagement and connection and testing content with various music options can help pinpoint what is right. From there, brands can choose the best music with the price that meets their budget and hope to maximize the success of their campaign.

Save those popular songs for your personal streaming playlist and save a boatload of money while you’re at it.

What can you do with that extra money? Why not get a subscription to Immersion’s SaaS platform to help pinpoint your highest moments of Immersion with your audience and truly maximize the effect of your ads.

Send us a note or sign up for a demo! We can’t wait to talk to you.