Is NBA Lane the best sports ad ever? 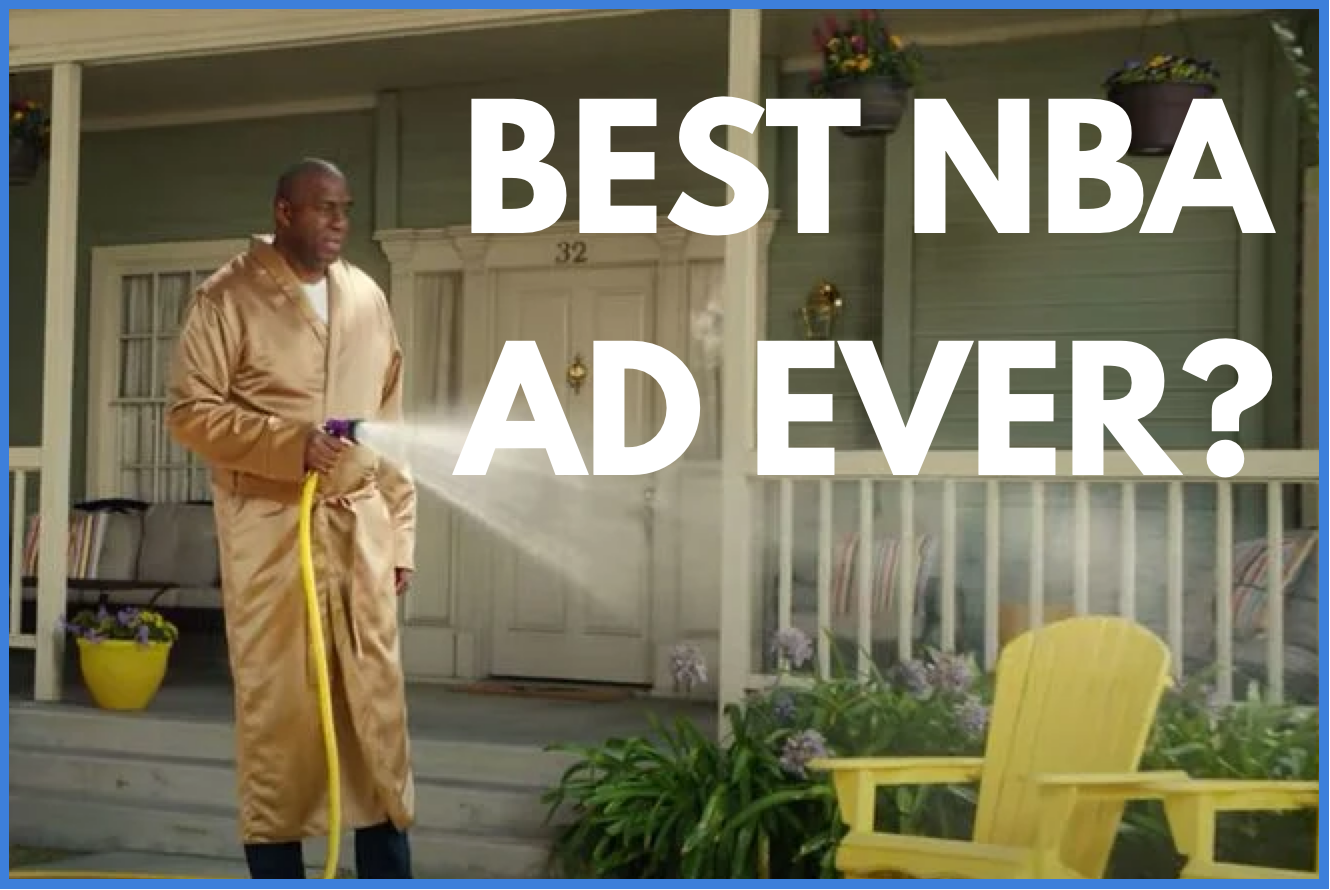 AdWeek calls ‘NBA Lane’ “one of the best sports ads ever." Created to celebrate the 75th anniversary of the NBA, it has the high profile ingredients, but does it actually reach their target audience - the fans?

NBA Lane made a big splash with AdWeek and AdAge when it launched. It’s a stroll down memory lane with big bucks spent lining up the who's who of the NBA. From Magic, Larry and Kareem to Devin, LeBron and Zion, the spot had players trading competition for camaraderie and even included some Easter egg moments placed for the superfans.

So is it actually one of the "best sports ads ever?"  We dove in to find out.

We could be looking at $180 Million in missed sales opportunities.

One thing that is so wonderful about measuring the emotional brain response, is that brains don’t lie. You might be the biggest NBA fan and you may really want to like the ad. But “like” is not enough, you need an immersive experience to achieve your marketing goals, like brand recognition or conversion on a CTA.

With an Immersion score of 44 (scores range from 0-100) NBA Lane did a reasonable job but stayed 9% below the industry average for advertisement. More importantly, this commercial leaves revenue opportunities of 18% on the table. Putting this in context of the more than $1billion in NBA merchandise revenues, 18% could represent up to $180 million in missed sales!

Targeting Everybody Is Targeting Nobody

Katie Jhavari, CMO of the NBA said: “NBA Lane’ was created to connect with both casual and core fans as we celebrate the league’s 75th anniversary season.” An interesting statement by a CMO, given that marketing is all about targeting the right people.

Let’s take a deeper look at this.

Self declared NBA fans have actually scored higher than casual observers, but not by much. And even those core fans have scored below industry average.

'NBA Lane' did get a lot of attention, but did not actually capture the imagination of the audience as much as expected. With a score below market average, there are steps one can take to improve the impact. This is why pre-testing your ad before release is so essential.

The first aspect to understand is what is the actual objective of this ad? Yes, the stated purpose is to celebrate 75 years of the NBA, but as with most sports ads … eventually that celebration will hopefully lead to engagement with the brand, tuning into games, and even buying gear. Ideally, it will not just be a celebration, but a call to action.

We see the audience being absorbed when Michael B. Jordan drives the bus down memory lane and calls out the 75th anniversary of the NBA. So it is likely that many will remember that fact. Unfortunately, the immersion drops off fairly quickly after this. The ad goes into the “red” as the bus drives to a community basketball court. At this point the ad runs the risk of viewers tuning out and walking away. 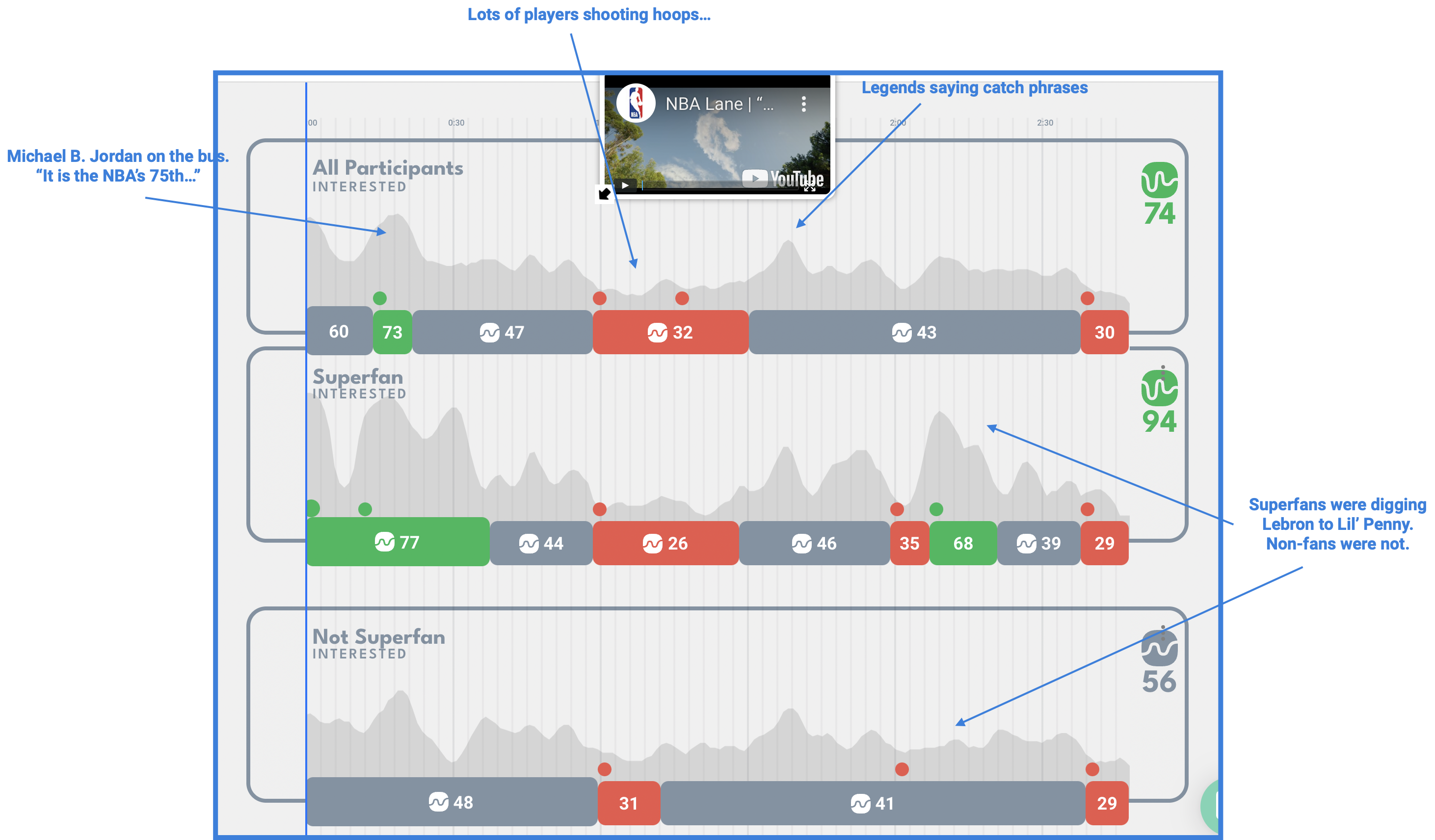 One way this ad could captivate brains more effectively is to build in a deeper, more engaging story. While there is an attempt to create something around the various players living in the same neighborhood, there is no flow or plot to the tale. The players are not connected with any narrative other than living on the same street. The human brain loves a story that it can connect with and follow along, and we see the brains being measured searching for and failing to find that in this spot.

Adding to the story challenge is the number of faces and people to look at and remember. While of course, seeing some of these players can trigger nostalgia, the jumping from face to face without weaving them into a story or providing deeper meaning, leaves the brain wanting more. Glimpsing your heroes from the past at such a speed is actually more overwhelming than engaging for a brain, and we see that in the measurements.

One way to improve this is to highlight the power of nostalgia that these players carry. Slowing down the introduction of new "neighbors" and allowing them to participate in the narrative would help our brains spark to this content rather than just our desire to identify players and "like" it because we think we should.

I’m not sure that AdWeek’s claim of this being the best sports ad ever really holds up, but I was entertained for most of it. But again, I am a big fan of the NBA so I am going to tune in regardless. While I am sure we won’t be privy to the numbers, only time will tell if this ad draws more people to watch the game this season.